Political-ad spend on out of home media was up in the first quarter of 2020 and also up in March compared to similar period in 2018, according to Kantar tracking. 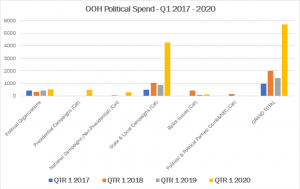 A crowded (or sold out) TV market benefits OOH media.

Out of home is a small but growing fraction of the record spending on political messaging.

Political candidates and causes use billboards and other out of home formats for branding, call to action, expression of ideas, and debate.

In Georgia, Congressman David Scott knew what to do when the primary election was postponed due the pandemic: Scott’s campaign extended the length of its billboard showing, says Joe Garner of Clear Channel Outdoor.

Scott (D-GA) is a longtime billboard customer; he faces challengers in the 2020 Georgia primary.