Starting with constitutional law and ending with cannabis, Ken Klein of OAAA flagged trends affecting out of home (OOH) media.

Here is a re-cap of Klein’s presentation to independent billboard operators (IBOUSA) in Savannah on May 9.

First Amendment free speech protections knocked out San Francisco’s mandated warning label on ads for sugary drinks and Cincinnati’s targeted tax on billboards (that case is on appeal in state court in Ohio).

But the sharp sword of the First Amendment also cut down Tennessee’s billboard law, Klein said. A federal appeals court is expected to rule soon on the Tennessee case (Thomas v. Schroer), which could go to the US Supreme Court.

The billboard industry is keeping close watch on this case because federal and state billboard laws say government must compensate billboard owners and landowners if government removes billboards. The industry’s goal, Klein said, is to preserve just-compensation protection.

Paying for Roads and Bridges

Ultimately, government will consider moving away from the gas tax toward taxation of miles driven, Klein said. The new method, called VMT (vehicle miles traveled), would be controversial due to concerns about privacy and fairness.

The gas tax will seem outmoded as more engines become hybrid or electric. The federal gas tax, which is not indexed for inflation, has been 18.4 cents a gallon since 1993.

Focus on Right of Way

The scramble to pay for roads and bridges will keep focus on various proposals to commercialize/monetize the highway right of way.

So far, the Trump Administration has been consistent in preserving existing regulations against advertising and other commercial activities in the public right of way:

Klein described alcohol as a “mature” category that embraces self-regulation of advertising.

Eventually, the cannabis industry seems likely to settle on self-regulation of advertising similar to restraints in place in the alcohol industry, Klein predicted. 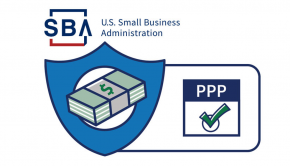 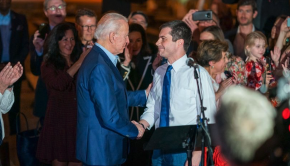 Who is Mayor Pete? → 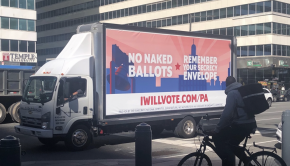