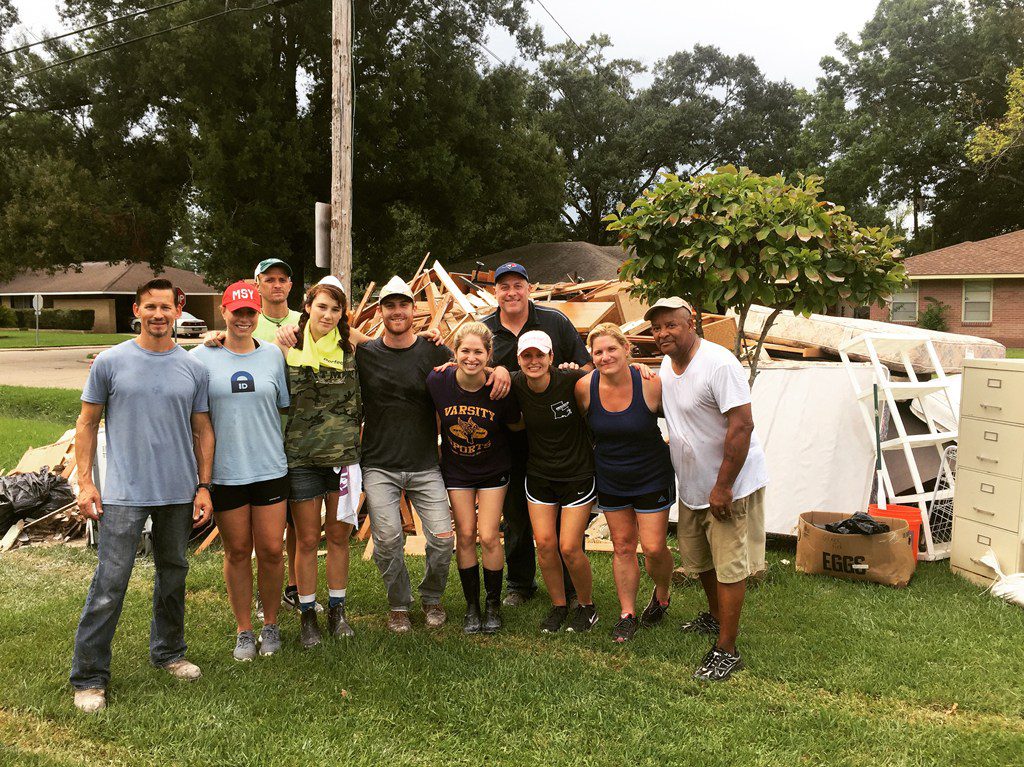 How a Community, Industry Came Together During the #LAFlood

Imagine purchasing a home. Do you buy flood insurance or do you not? If the mortgage company doesn’t require it, then why would you? They require it for any homes that lay in a flood plain, so you feel pretty confident declining the insurance. Imagine watching it rain continuously over a 48-hour period. You don’t really think much of it, because well, it seems to rain quite a bit in southern Louisiana. But this time feels a little different. You hear on the news that some streets are flooding, and there are a few school closures. You may have to keep your children home, but it doesn’t affect you too much. After all, your home isn’t in an area that floods.

Now, imagine watching continuous local news coverage of some local good Samaritans, now dubbed “The Cajun Navy,” taking their own flat bottom boats and making continual trips to rescue people from the rising waters. It is sad, it is devastating, but at least your home is safe. It is not going to flood. But then you notice water creeping down your street and slowly into your front yard. How can that be? Where is the water coming from? There was no way your home could flood. But, the water is moving in fast. There isn’t much time. You have to make a decision to evacuate your home. But you didn’t have time to prepare. You put a message out on social media where you are located because cell service has become spotty. Soon, someone, whether it is one of our brave police officers, first responders or a complete stranger, will be at your home in a boat to bring you and your family to dry land. What do you pack? What do you attempt to save in those fleeting moments? You grab your children and your animals, and maybe a backpack full of clothes just to be cautious. At the last minute you grab the doll your daughter cannot sleep without. Now your “knights in flat bottom boats” are here. You and your family must go now, because other people need rescuing as well. As you pull away, you remember your wedding pictures. You forgot to put them up high, but it’s okay. They will be fine. After all, the water is still low and only in the streets and in your front yard. Your house won’t flood. They will be safe…but they weren’t. 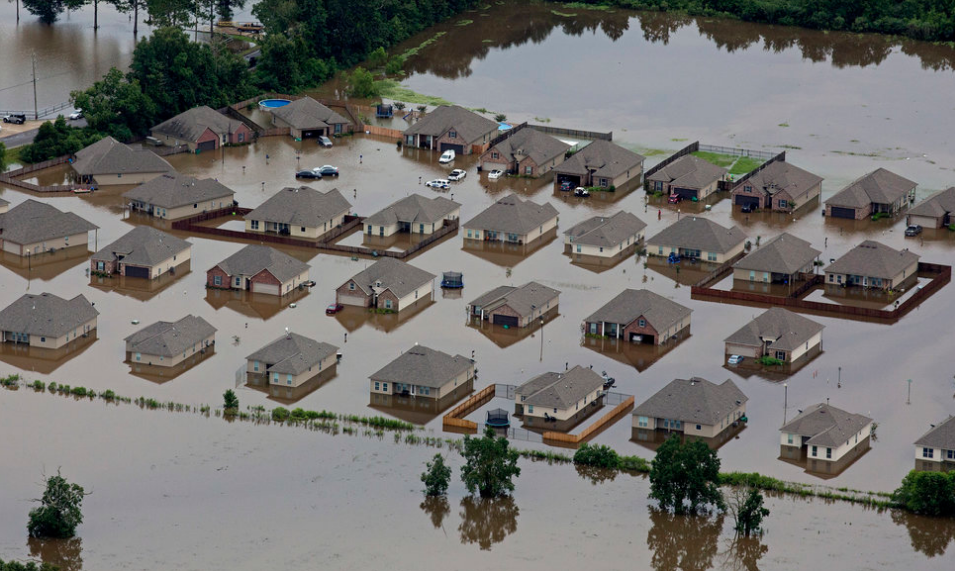 I personally cannot imagine this, as my family’s home was safe from the flood waters. Unfortunately, I cannot say the same for the people that lived in the 60,000+ homes that were damaged or destroyed. I, just like them, was not required to purchase flood insurance. My family was lucky, and my home was spared. You feel so helpless watching the devastation on the local news and social media. You feel guilty that just a few miles away, friends, family members, and co-workers have lost everything.

This low pressure system, likened to an inland tropical storm, swirled over our state from August 11-13 and dumped 24-31 inches of rain. It was responsible for the largest natural disaster our country has seen since Hurricane Sandy. 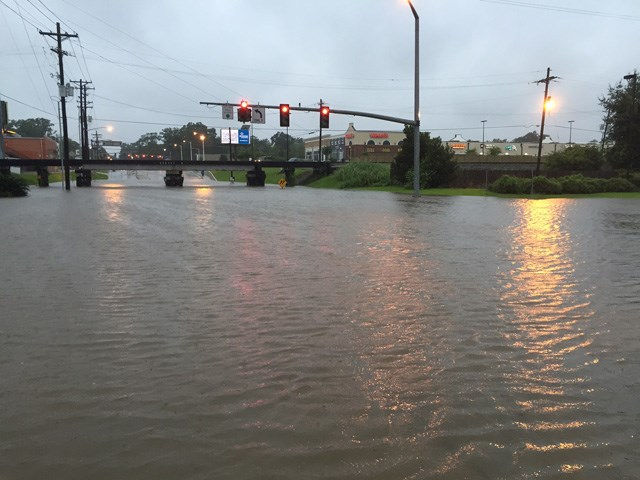 But, most of the country wasn’t aware. They didn’t know that over half a dozen rivers had crested well over previous levels. These rivers overflowed into bayous, streams, and eventually neighborhoods, schools, and businesses. They didn’t know that not only 30,000+ people had been rescued, countless others were now stranded, some for over 24 hours on our interstates that were shut down due to rivers overflowing onto them. They didn’t know that 13 people had died as a result. There was little national coverage on how these people, our neighbors, were suffering. How could something so catastrophic not deserve anything more than a 30 second mention, squeezed in between Olympic updates and Election coverage? 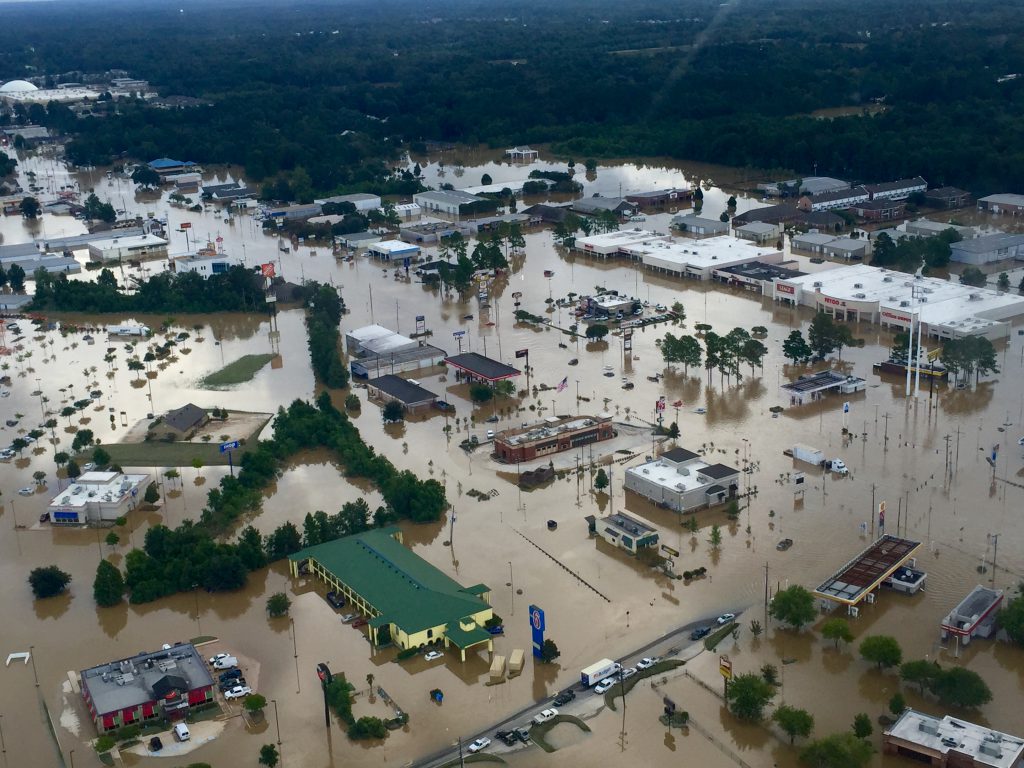 Despite our frustrations, we didn’t have time to sit around. People needed help and they needed it immediately. In a matter of hours, Celtic Studios, our Louisiana’s flagship production studio with seven stages, was turned into a shelter. It would become temporary housing for over 2,500 evacuees and their pets. This was just one of many shelters that had been formed in the early hours of this disaster. 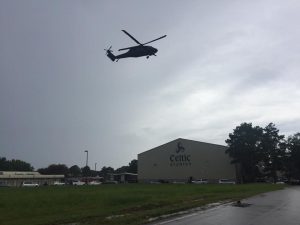 Celtic Studios became the hub for those people rescued by the National Guard. Black Hawk helicopters circled the area, landing one after another. As quickly as they landed, they took off again and went back out to rescue more people stranded on the roofs of their homes.

Those who were not delivered by helicopter were brought in by large cargo trucks. In the beginning, before federal assistance arrived, the shelters were manned by local volunteers doing the best they could to make sure the basic needs of the shelter’s displaced residents were met. 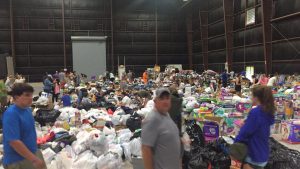 People scrambled to gather supplies to bring to the shelters. Cars lined the streets for what looked like a mile, in a carpool like fashion, waiting for their turn to drop off the donations and supplies they had gathered. It was amazing to see the community members come together like they did to help in any way they could. I feel that it is important to describe this scene, because once the media did cover the story, all of this was missed. 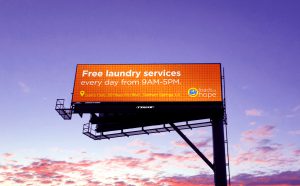 After the water began to recede and the damages were being assessed, rescue turned to recovery. While the flooding was occurring and the days after, Lamar Advertising’s digital network became a source of information. Procter and Gamble’s Tide Loads of Hope had dispatched trucks to the parts of town that were heavily affected to wash and fold laundry. They utilized our Digital Billboard Network to inform flood victims of where their trucks would be located.

Louisiana State University converted their messages on our digital boards to display heartfelt creative, featuring togetherness. And Lamar donated digital space to Baton Rouge Area Foundation, whose creative displayed ways the community could give back. Across the US Lamar markets displayed Red Cross creative to inform the rest of the country how they could give back.

But Lamar is a family, and some of our family members were suffering. Our company alone had over 60 employees whose homes had been damaged or destroyed. With the help of Lamar employees, clients, agencies, and even competitors, donations began to roll in. Lists were compiled of employees needing help, damages were assessed, and teams were assembled to tackle the work that needed to be done.

First everything had to be removed from homes. Even sentimental items had to be tossed into the large piles of rubble that lined the streets of these neighborhoods. It was heartbreaking to watch as people threw out things that just a few days before had meant so much to them.

After the contents were cleared, demolition work began. Accountants were knocking out bathtubs, lawyers were cutting out sheetrock, and Marketing, Sales and Leasing were demolishing entire kitchens. 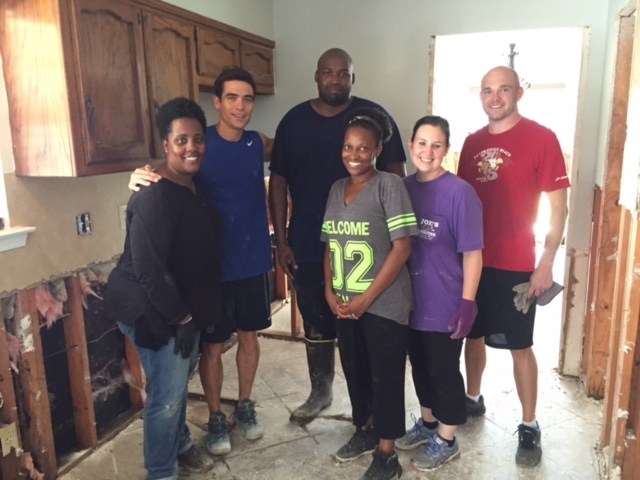 After a little under two weeks of work, our job was done. Their homes had been gutted and were set to rebuild. As a community we were all impacted one way or another. I am fortunate to work for a company that cares so deeply for its employees, and will do whatever it takes to take care of them.

As our community tries to return to some type of normalcy, our long-term goal is to rebuild. This is the most important phase, but also the longest. Some people will be without homes for months on end. This will be an exhausting journey for them, and for those without flood insurance, a costly one.

We are all thankful for the way the OOH industry stepped up in this time of need. The fundraising campaign OOH Advertising for Flood Relief started by the OAAA with generous contributions from the OAAA, The Fletcher Family Foundation, FOARE and many others has already raised more than $65,000 for the Baton Rouge Area Foundation. This campaign is currently ranked 1st out of 22 campaigns and has helped contribute to the almost 1.5 million dollars raised to date for flood victims.

I am blown away by the kindness I have seen among our community, company, and industry, and have never been more proud to be a part of each one of them. I want to thank everyone who has stood by and supported us in different ways during this difficult time. You have been amazing!