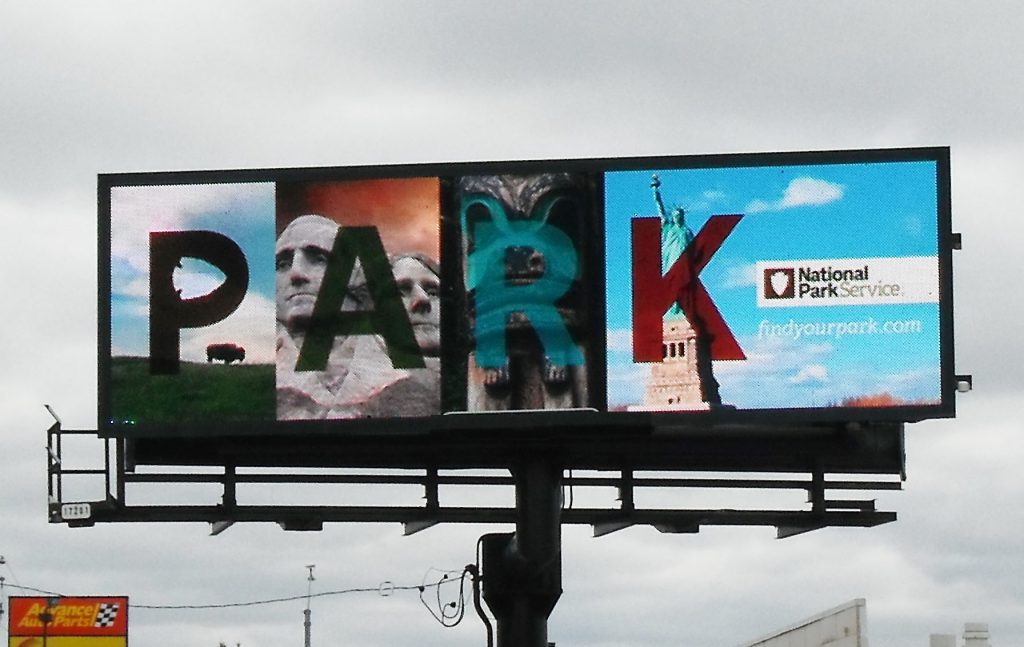 A sophisticated multi-media campaign celebrated the centennial of the National Park Service (1916-2016), relying on out of home (OOH) formats nationwide.

To find the answer, I went to Oregon Caves National Monument & Preserve, lesser-known than marque destinations like the Grand Canyon.

I was 3,000 miles from the New York ad agency (Grey) that created this campaign, Find Your Park.

Proof Point No. 2:  Young people – a key demographic target for the Find Your Park campaign – crowd around engaging park rangers to learn about geology.

Through July, visitation at Oregon Caves was up 14 percent over last year.

Nearly all exposed to campaign ads became more interested in visiting a National Park. Nationwide, visitation hit a record in 2015 and is on track to set another record this year.

Awareness of parks is up nationwide, including among millennials. The number of volunteers was up 79 percent in the first year of the campaign.

A centennial campaign was launched in Times Square on April 2, 2015.

For two years in a row on Earth Day, digital OOH formats posted the campaign creative for a nationwide roadblock.

“Billboards, mobile displays, spectaculars, and other OOH formats helped celebrate the majesty and diversity of America’s parks, encouraging people to ‘Find Your Park,'” said Will Shafroth, president and CEO of the National Park Foundation.

Like 4 million others this year, I also visited Yosemite National Park in California. Campgrounds, tram tours, and lodging are booked.

Answering the call-to-action to “Find Your Park,” here’s what I found. Yosemite’s early advocate, John Muir, was an immigrant. A century later, Yosemite attracts visitors from around the globe, particularly Germany, Korea, Taiwan, and the United Kingdom.

At our B&B near Yosemite on August 12, my wife and I were the only American guests at breakfast.

As breakfast ended, young Gustav Hertz from Sweden had a question for us Americans:“Is Yellowstone worth coming back (to the States) to see?”