Thousands of congressional staff and lobbyists – key influencers in the nation’s capital – commute through a transit domination station currently sponsored by Koch Industries.

Above ground, not far from The White House, an innovative bus shelter ad displays a digitized National Debt Clock.

Proximity to power is an elixir that drives advocacy advertising in Washington, DC, and places like it. Advocacy pitches are an important revenue stream for publishers, broadcasters, and out of home (OOH) media near the center of power (OOH was up 7 percent in the United States in the third quarter).

On the day the US House voted on impeachment (December 18), the print edition of Politico ran six full-page advocacy ads:

The next day, The Hill printed a two-page ad from the American Lung Association on Medicaid funding and a full-page ad placed by Jewish Voice for Peace criticizing President Trump’s Executive Order on antisemitism.

The goal of the Koch corporate ad campaign is to explain the conglomerate beyond the well-known conservative political identity of its leaders.

“Among some people, there’s a misperception about Charles and David Koch, and while this [ad campaign] won’t directly address those misperceptions, it will fill in the blanks a little bit about Koch and about what kind of company our shareholders lead,” Steve Lombardo of Koch Industries said in 2018.

Some 10,000 people work for the US House of Representatives, more than half in Washington, DC. A key chokepoint in their daily travels is the Capitol South metro stop near the Cannon, Longworth, and Rayburn House office buildings. Omni-present Koch ads remind this target audience that the sprawling company makes durable fabrics, glass, 5G connectivity, plant nutrients, and more:

In promoting ridership, Metro’s own ads promote the environmental advantages of transit.

Throughout the capital city – on digital bus-shelter posters — the federal traffic safety agency warns drivers not to text and drive.

And still no arrests? 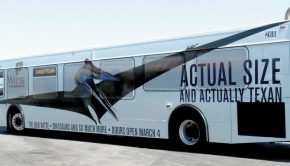